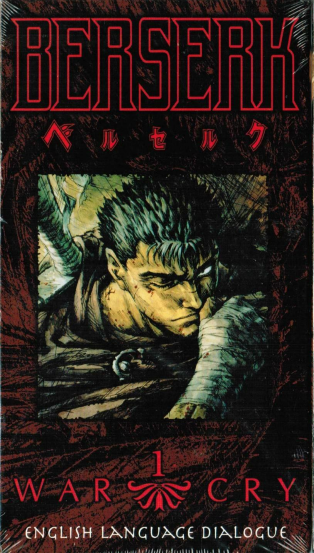 "Is it really true that man has no control; even over his own will?"

Berserk's an awesome anime. I'm not exactly a fan of how they handled the first episode but I can tell you this, the rest of the series more than makes up for it. After you're introduced to the main character, Guts, you'll be taken to a stroll back memory lane to the "Golden" Age Arc, which covers Guts' childhood and his time at a mercenary band and is the defacto beginning of the story. And boy does it get groovy. Lots of blood, gore and of course, Guts.

Animation: 7.5
This is really not the best of its time. You get a lot of the dark atmosphere, dismembered body parts and amazing character animation but you really get a lot of stills in the fight scenes (for example Guts vs. Zodd), and it somewhat detracts a little from the experience as whole. But since reproducing what the Manga did would be neigh impossible with the technology of the time I can let it pass.

Story: 10
It's fucking great. You go from a grimdark edgy '80s OVA at the start to a medieval drama/military flick about a gang of mercenaries in a seemingly endless war. Its greatest strength are the characters, which grow as the story goes on. You're also not gonna see any typical anime cliches here, so its a really fresh change of pace.

Style: 10
It looks awesome for one. Characters look simple and it works really well for its setting. Background art is pretty well done and it faithfully recreates the feel of the manga.

Overall: 9
Berserk went above and beyond for an anime adaptation of its source material, the only sin that I can attribute to it is not adapting the rest of the manga but bygones are bygones, go watch it this halloween and you're going to have a nice surprise in store for you that will leave you craving for more.