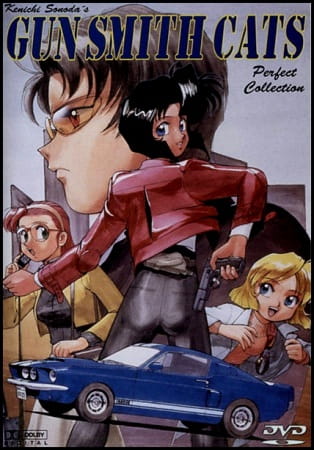 The show itself is separated into 3 OVA's which cover an overall arc. It's based on a long-running manga by Kenichi Sonoda (which also worked on the Riding Bean OVA, which as of this writing I have not seen yet). Contains a lot of swearing, mild violence, and obligatory fan-service. Let's get on with my ratings of this work.

Animation: 10
You probably won't see this level of awesomeness in a car chase in a '90s anime anywhere else. Okay, maybe with Lupin's Tokyo Crisis Special. Episode 2 has this great chase where one of the main characters, Rally, is driving her supercharged Shelby into the interstate chasing the villain to save her partner, and you have to see it to believe it! Pretty sure that it holds up after all of these years.

Story: 7.5
It's your run-out-of-the-mill action flick story, a very simple but fun story about two girls doing the bidding of a government agent against a state-wide gun trafficking ring. It's not anything great, but it's well-executed and it's not stupid.

Style: 10
If you know me, you probably know that I dig this sort of stuff. Gunsmith Cats draws a lot of influence from the small screen and the big screen of the '70s, right down to the intro from the guns and cars. They look great in this show, very accurate to the real thing. This show overall reminds me of The Blues Brothers (it is set in Chicago, after all), although Rally's Shelby isn't as cool as the Bluesmobile...

Overall: 9
I'm a sucker for shows like this, they went above and beyond with the animation, and the story's pretty solid. The action is what sells the whole package and the atmosphere is great too.