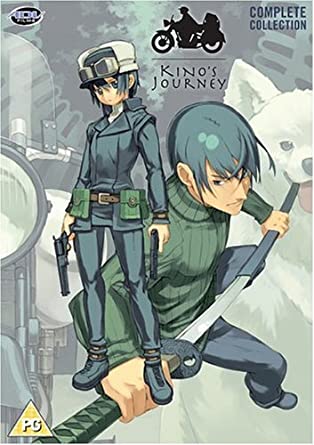 “The world is not beautiful; therefore it is.”

Kino no Tabi (translated as Kino's Journey) is a hauntingly beautiful road-trip TV anime series that came out in 2003.

Animation: 7
It's not the best out there, even back then there were shows produced with state-of-the-art rotoscoping and other mind-blowing techniques (like the Cowboy Bebop movie) but it works perfectly for this show. Kino is a Slice of Life with a very dark tone, the most predominant color you'll see is gray. You would think that it would be very drab but it's actually a very good look for it. Besides that, it's perfectly watchable today.

Story: 10
Kino doesn't really have an over-arching story. It's a bunch of loosely connected short stories about a traveller named Kino and her talking bike Hérmes visting many countries along the way. The stories themselves are amazing, each of them are smartly crafted and the writing doesn't insult your intelligence like many anime out there.

Style: 8
It's dark. The art quality is kept throughout the entire anime so that's a plus to me, takes a few notes from Serial Experiments Lain and Haibane Renmei. I don't have much to say about that kind of style, but it's pretty nice. I wish they brought it back.

Overall: 9
It's a must-watch in my opinion, 13 episodes of pure goodness and 2 OVAs (one made by SHAFT!) though the 2017 reboot was kind of a failure in capturing this whole style. I might write a review on it later on. Anyhow, watch it. You won't regret it.