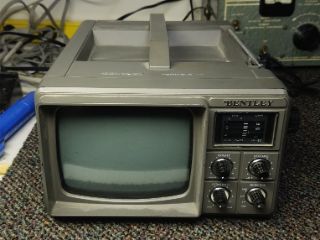 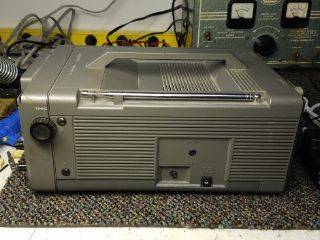 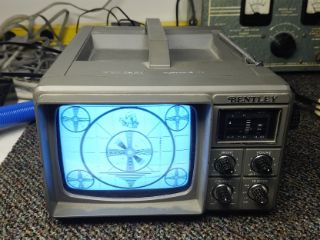 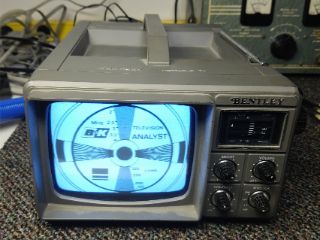 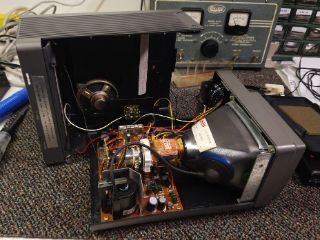 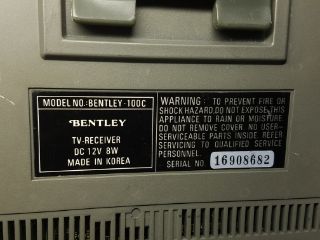 The Bentley 100C black-and-white portable television (no relation to the luxury car company) is pretty basic as far as miniature portable televisions go - it lacks a built-in AM/FM radio and features only very basic controls to adjust the picture; however, it makes up for its lack of features with its sleek and very 1980s look. While not very usable in and of itself, as its only method of video input is the odd 3.5 mm "external antenna" jack apparently only used on these small portable sets, it makes a very good display piece, a role my Bentley is currently serving quite well!

An anomaly in the vintage television collecting community, the Bentley set is incredibly common and can be had for very cheap. These sets were apparently given out as promotional items and therefore still pop up complete, often in the original boxes, evidently never used or used very little. Nearly every friend of mine in the community owns or has owned one of these sets in the past. My set was acquired from my father, who was presumably handed it at one of the aforementioned promotions, except he went the extra mile and actually purchased the AC adapter and a set of Bentley-branded headphones to go with it. Bentley was slick with their marketing - the set was cheap or free, but an AC adapter was NOT included, needing to be purchased separately, and many people likely did not want to shell out the money to purchase the nine D-cell batteries this set requires for operation. Furthermore, the AC adapter was not easily substituted, as it is center-negative and uses a slightly non-standard plug. This marketing technique is still used today, most prominently with ink printers, where the replacement cartridges may very well cost more than the printer itself - and they cannot be refilled or modded, lest the printer refuses to print with the rebuilt/modded cartridges installed. A scummy marketing technique indeed, but one all too common in the world today.

In conclusion, this set is absolutely nothing special, but it looks so cool I thought it deserved a place in my collection. It has required no maintenance from me at all (I've opened it only once to take pictures and to log the technical information), and it still works perfectly fine with my RF modulator and DTV box. Would I suggest you, the reader, go out and buy one of these? If you like to collect small portable televisions and can find one for a bargain...go for it! It can be found for so cheap there really is no loss in purchasing one to play with.

- 140BSB4 and 5FNS4 listed as alternate picture tubes used in this set.

- Many circuits in this set were consolidated into a few ICs - there are only three or four transistors in this chassis, one of which is the horizontal output transistor.

- The company that sold these sets was supposedly named "Bentley Industries," located at 5425 Grosvenor Blvd., Los Angeles, CA 90066 (building currently available for lease!). My set is marked as having been manufactured in Korea by one "Quantronics." From what I can find, Bentley only sold a few different models of these portable sets (1000, 4500, etc.) before quietly going under some time in the 1990s. I have found pictures of Bentley-branded grandfather and table clocks, though I am not sure if this is the same Bentley or another importer under the same name. I am not sure how they were able to get away with using the same brand name as a very large luxury car company; your guess is as good as mine.