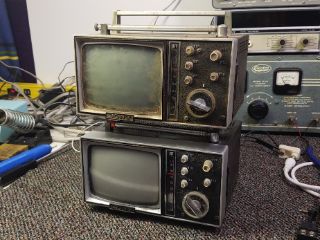 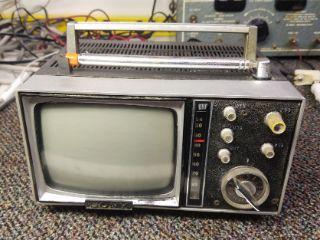 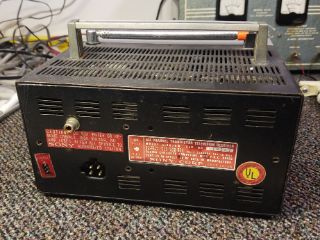 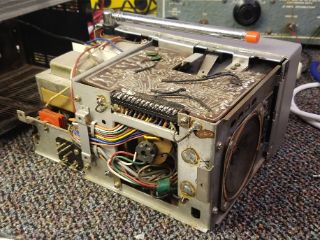 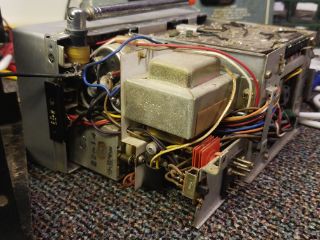 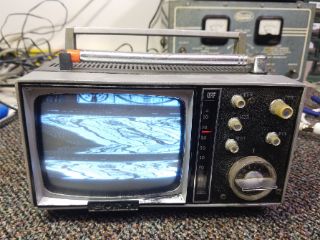 The Sony 5-307UW "all channel transistor television receiver" is the oldest miniature portable television set currently in my collection, and a fine example of an early Sony television set pre-dating the famous and highly-regarded Trinitron line. Ironically, it is not a true "all transistor" television, as three 1DK1 high voltage rectifier tubes are tucked in the high voltage box with the flyback; this would more accurately place the 5-307UW in the "hybrid" category.

The 5-307UW has a somewhat unique tuning mechanism in that the VHF band is tuned using a rather standard continuous rotary tuner; however, UHF is accessed by setting the rotary tuner to the "UHF" setting, then using the fine tuning knob and slider indicator to navigate the band. These sets are extremely well built and are absolutely packed to the gills, with the majority of the circuits being placed on plug-in PCBs that can be disconnected and slid out for relatively easy servicing.

One con of these sets is the power plug - Sony decided to forego the conventional interlock plug popular on American sets, and instead designed their own four-prong plug which could be plugged in for both AC and DC operation, two pins corresponding to each type of power input. These cords are difficult to find today, but my sets thankfully came with their original power cords, so I did not need to worry about fashioning my own: 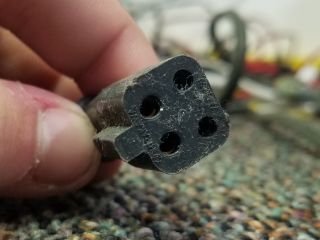 I actually own two of these sets, identical in appearance and construction as seen in the first picture. I acquired them along with a similarly sized "PVJ-3030" set, which looked nearly identical sans labelling and was evidently marketed as a portable video monitor. Unfortunately, it was missing so many parts I elected to part it out as I figured I would never find the parts I needed to get it working again (it was missing the entire front bezel and lots of parts in the tuner mechanism). The 5-307UW I've partially disassembled and photographed for this page is in much better cosmetic shape than the other set, and has been modded by a previous owner to add a more standard video input jack (RCA, instead of the strange 3.5mm "external antenna" jack apparently only used on small portable sets).

Unfortunately, time has not been kind to these sets. Being 50+ years old means a majority of the electrolytic capacitors inside have dried out or are in the process of drying out, so many sets on the market today do not produce a proper picture. My sets are no exception; both have insufficient or non-existant vertical deflection and cannot fully lock horizontally or vertically. They will need to be totally recapped before they will be able to properly display an image, no easy task considering both sets have around 50 capacitors each, and have the selenium rectifiers replaced with modern diodes to ensure reliability. As of the time of writing (12/27/19) they have not yet been rebuilt, but I hope to order the parts for them as soon as possible and will update this page when that happens.

- Service information for this television set is covered in Sams PhotoFact set #811, folder 4.