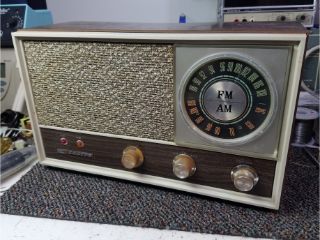 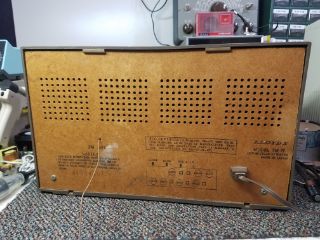 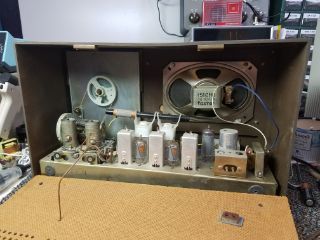 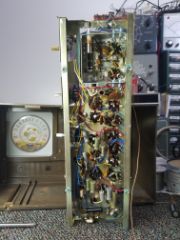 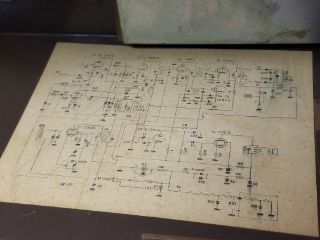 It is quite interesting to see how differently this Japanese-built radio was constructed compared to a "regular" US-built set. It doesn't use any paper caps, instead using lots of ceramic disc capacitors and oil-in-paper caps (which I replaced after taking the chassis photo, as they are known to be just as unreliable as paper caps in US radios). It uses slug-tuned IF cans much like AA5 radios of the time period, but these cans do not appear to be susceptible to silver mica disease as this radio (and many other radios posted about online) are chugging along just fine 40-odd years after they were shipped from the factory.

My radio was bought at the flea market from a guy who claimed it worked fine; although I usually take this with a grain of salt, he was at least partially right - AM worked quite well and the radio is reasonably sensitive. However...the FM band was totally dead. After some probing around, I discovered this was due to green corrosion on the pins of the 12DT8 tubes, and after some scraping with a Xacto knife and cleaning of the tube sockets, FM sprung back to life. I replaced the crappy oil-in-paper capacitors which are known to be highly unreliable, buttoned the set back up, and it was ready for service! The speaker is a bit lacking in the bass department, but otherwise it works well and sounds pretty good.

- The original electrolytic filter capacitor is still present in the radio and working well. There is no hum in the audio at all!

Return to the radio hub